For hundreds of years, influence has circulated among affluent European folk, highly educated and living in cities. These guys formed our laws, built networks of influence, ran companies and nonprofits, and produce creative works that influence us today.

And often, it’s hard for others to really be heard until people like this accept and amplify our voices. As Allen Johnson notes in Privilege, Power, and Difference, one of the hardest things about creating an equitable culture is that privileged men and women often don’t even realize what benefits that we have.

Over-representation of men in the media

When Adrienne Lafrance analyzed her reporting this year, she found she’d interviewed many more men than women, even when expert women were available to speak and become recognized for their expertise. This is endemic in the news industry, she says, where men:

“get more bylines, spend more time on-camera, and are quoted far more often than women—by a ratio of about 3:1…  When women do show up in the news, it is often as ‘eye candy,’ thus reinforcing women’s value as sources of visual pleasure rather than residing in the content of their views.”

Lafrance was especially stunned because she knows this is an issue. Yet she ended up reproducing the problem anyway, reinforcing the influence of those who already have the most influence.

This matters because how we represent people influences how we treat them. It’s a lighter version of what’s been happening in some Orthodox newspapers, so fastidious about not arousing men’s desires for women that they actually airbrush professional women out of public life: 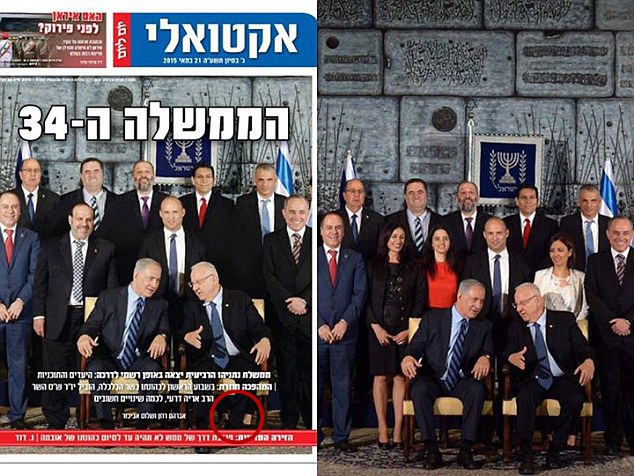 And that’s a problem, obviously, because a picture without women reinforces the idea that the sexes must be segregated, or that men are our real leaders. Even when women are leading countries, researching physics, and leading battalions in war, and have done so for generations.

Where are the women in film? Putting it to the Bechdel Test

This reminds me of the Bechdel test, proposed 30 years ago by cartoonist Alison Bechdel. To pass the test, your book or movie should have:

Or, as KS DeConnick puts it, if you can switch out your ladies for sexy lamps, and the plot still moves forward, “…maybe you need another draft.” Either way, these tests remind us that when we see both genders having rich, full lives, we’ll all enjoy media and learn more from it, whether it’s realistic or fantastic.

And we’re slowly making progress. The original Star Wars failed the Bechdel test, but The Force Awakens passes. You can see how six thousand other films stack up at bechdeltest.com:

It’s not the most sophisticated metric ever, but it reminds us of how what we watch influences our perceptions of each other. Another version is the Mako Mori test:

“Is there at least one female character with a major story arc that’s not about supporting the man’s story?”

In other words, does she have a story that isn’t about who she marries? That isn’t about helping a man grow into leadership? That centers on her own choices and calling in life, not who wins her or who avenges her?

In her feminist frequency videos, avid gamer Anita Sarkeesian highlights these challenges–pushing for engaging video-game worlds that don’t treat half the human race as objects to be violated, shot, or rescued, and asking for playable female characters to balance out the damsels in distress:

And to be fair, we can put the same questions to some women’s media: do the men involved have relationships with other guys, or is this mostly about competing for and flattering the girl?

The Bechdel test has also been used to evaluate comics:

And even software, checking to see if source code uses functions written by women developers. This isn’t as hard as you’d think, as such engineers write the code for some of our best apps:

The Bechdel test for books

Finally, we can evaluate books as well, as one English teacher realized:

“…it occurred to me how few of the classic works of literature that I teach to my high school freshmen would pass this test: The Odyssey? Nope. The Narrative of the Life of Frederick Douglass? Nope. Adventures of Huckleberry Finn. Nope. Romeo and Juliet. Nope.”

Kovarik realized this is less about us being “good people.” It’s more about learning to see the culture we swim in and how it has very real influences on our lives:

“When I realized that even War and Peace, a novel so vast, all-encompassing, profound, and moving, presents a seriously diminished portrait of the lives of women, I began to see that the deeper point of Bechdel’s test is not to accuse Homer, or Tolstoy, or me of being sexist.

“Instead, the test reminds us that biases like sexism, racism, heterosexism, and classism are the water in which we swim. They pervade our culture. They are our culture, and to such an extent that we sometimes forget about them until someone like Bechdel reminds us.”

Changing how we watch, and how we write

As Kovarik points out, gender is a big deal. So is coloring, weight, income, ethnicity, and other identities. All of these things shouldn’t shape perceptions of who’s competent, aggressive, friendly, successful, or respected. But they totally do.

And this comes back to the power that images and stories have over our lives. As Harriet Brown writes,

“people living in wealthier cultures are exposed to more marketing and advertising as well as more media in general,” and the more exposure to American media, the more people experience body image and confidence issues (Body of Truth, 135).

We like to think that the images and stories floating around us don’t affect our lives. But study after sociological study shows that they do. Even preschoolers absorb our cultural values around thinness, smarts, popularity, and beauty (Brown, 143), and infants form long-lasting beliefs about human beings and the world we live in by watching television (Hrdy, Mother Nature, 77).

So when we tell the same old media story, it often has us inviting educated, attractive white guys to the table first. Hiring white people first. Having men speak first at conferences. Publishing books by men first (As Catherine Nichols found, “George” was “eight and a half times better than me at writing the same book”).

We assume guys are smarter than they are, or code better than women. And we underestimate how smart, ambitious, and effective other people actually are.

So what can we do about it?

Have other ideas or stories to recommend? I’d love to hear them!