Where do young librarians end up? In conversation with the ALA Think Tank group on Facebook this fall, it’s evident that recent grads struggle to understand the job market and whether their experiences are comparable to others. Library Journal gives out yearly stats on salary and placement, but it doesn’t ask what we want to know: how many jobs are recent grads applying to? How many jobs are out there? How long does it take to get a job? If people leave the library field, where do they go? What could we do differently?

So! I set up a quick four-page survey and got 385 responses. I’m calling it the “Facebook Survey of Recent MLS Grads” to emphasize it’s biased sample and casual nature. It’s a good experiment, but please don’t cite these numbers without reading this full post plus a methodological critique. You can also view the original survey prompts here. And zoom in (Ctrl+ on PC, Cmd+ on Mac) or click through to Flickr to see these screenshots more clearly:

Where did you go to library school?

These are summary charts from SurveyGizmo; click through for a larger image. I first asked which MLS program people graduated from. The most common schools, with 20-25 respondents each, are here: 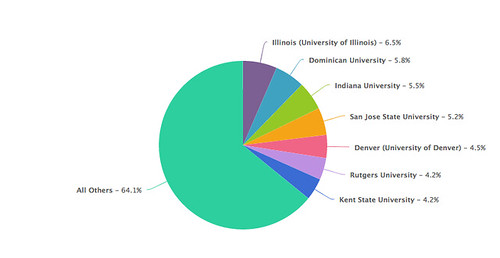 Oh, you want the full details? Don’t say I didn’t warn you… but the next chart lists all schools mentioned. Because total turnout by library school was low, it’s unfortunately not statistically meaningful nor ethical to release detailed data on each school:

When did you graduate?

This is a survey of recent MLS grads, and most of them are indeed recent grads. A few enterprising students filled out partial surveys in advance of their graduation: 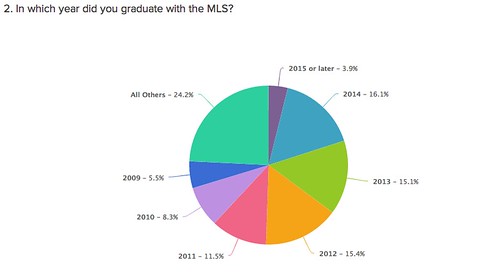 What region are you working in?

This is fuzzy, but borrowed from the Library Journal survey for comparison. I wish I’d asked for state instead. Lesson? Always ask for the most particular information you can, and aggregate it later. 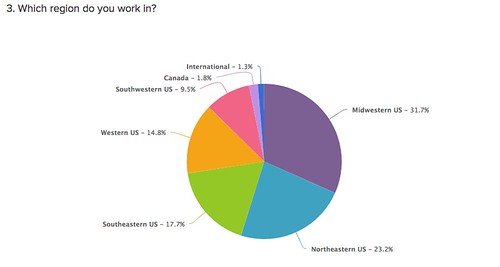 Where did you end up after library school?

I was pleased to see that 44% of people were working full-time within six months of graduation, and another half working part-time or in non-MLS roles. One in five were unemployed or volunteering while looking for work. Yes, these numbers overlap (e.g. unemployed and volunteering, or part-time and volunteering). People who didn’t find a library job four years ago are unlikely to still be on the Facebook group, and hence may be undercounted in this sample:

I hadn’t listed part-time MLS jobs as an option, but one respondent corrected me on this. It was great to disseminate a survey on Facebook, in spite of the issues, because respondents felt free to generally question and critique everything, and we all learned a lot.

One of my hypotheses was that people with paid experience before the MLS were more likely to find good work after. I’ll compare these factors later. For now, I’ll note that it was common for people either have no experience, or 1-3 years of paid library experience, while a few older folk come into a library program with 10+ years of related experience. We’ll see how this matches salaries later… 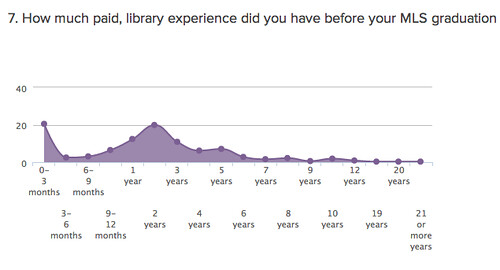 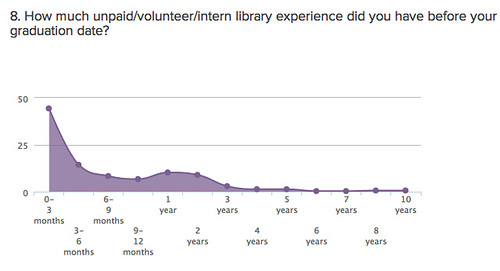 People spent 7-8 months actively searching for a library job, a number that rises if we exclude those who found jobs right away:

Months after MLS in low-paid work:

Here I wanted to check how long people used low-paid work as a stop-gap before finding a professional job. It’s oddly worded to discourage people from listing their professional job as ‘low-paid’ just because… it was low paid:

Months after MLS in unpaid work:

I also wanted to see how long people were spending in unpaid work as they looked for work. A quarter of respondents (50 out of 210) didn’t do unpaid work after the MLS, which is great. (I apologize for auto-reports that don’t label the Y axis, as that is a shameful, shameful thing).

Here we ask about time searching after MLS, not total months searching. I regret making this a drop-down box of categories, but I knew it would be easier for people to quickly answer than asking them to calculate 17 months from 1.5 years. Good news? People in this (biased?) sample found full-time work within a year of graduation: 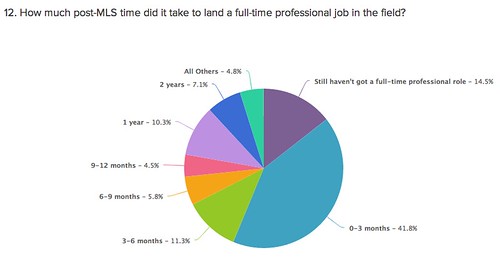 What type of library was your first job in?

Another classification borrowed from the Library Journal survey, showing that most people found work in public or academic libraries. Again, the sampling frame could undercount school librarians: 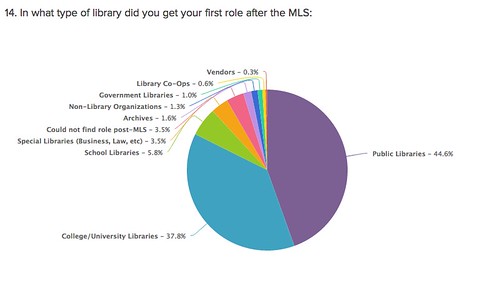 Department of your first post-MLS job:

Another classification from Library Journal, showing that most people are finding (or already held) jobs in reference, instruction, or children’s services. 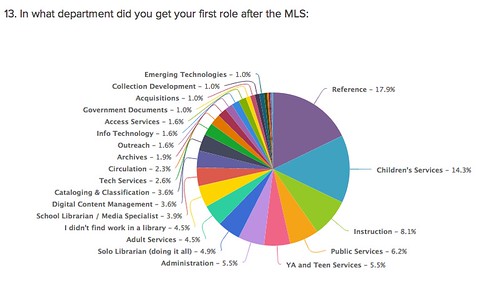 How far did you move?

I moved 1000 miles for my first post-MLS job, so I was curious if others had this same experience. Almost half of the MLS graduations who responded had relocated for work: 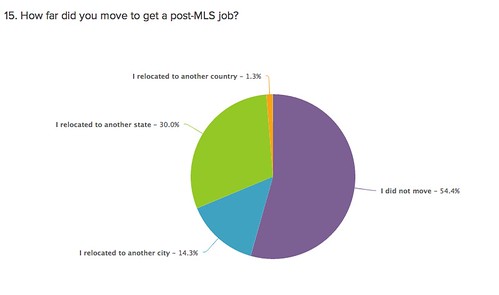 I wish I’d asked those who stayed whether it was because they got a great job, or because family needs limited their career. Moving seems important if you want to find a good job quickly, but because women are often expected to put their spouse’s career first, it may affect their own success in the job market. To check this, I wish I’d asked for marital/family status at time of MLS.

Many people applied for 0-1 jobs, suggesting that they continued or moved up within an existing library relationship. Others applied to 2-100 positions, with a rough average of 25 applications before the offer. I applied to 60+ jobs before landing a great one, and someone here applied to 300+, so no shame if you’re still applying!

Paid hours per week prior to MLS:

I’m not showing salary data in this post (I know, I know…) because the $ and , symbols that some respondents included threw off the summary reports; we’ll get to that in a future post.

Along with salary data, I wanted to know how many paid hours librarians worked each week, as they moved along in their MLS-to-Librarian transition. Here, roughly 2/5 of librarians worked full-time before library school, 1/3 were full-time during library school, and closer to 3/4 were working full time in the years after the MLS. I suspect again that societal roles around spouses and children may impact how long some women stay full-time in the workforce:

Who paid for your library degree?

Some people had multiple people pay the “majority” of the way, which is an interesting definition of majority :-), but I did want to see who all funds our degrees. Spousal support is lower than I expected, given the number of middle-aged women in library programs. Again, older grads may be under-represented in this sample: 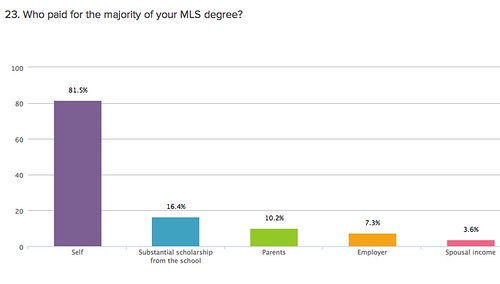 Student loan debt before the MLS:

Take a look at this chart. Look away in horror. Look back again (in the words of the man your man could smell like…). This area chart is screwy on the X-axis, and it’s why I can’t show you summary visualizations of salary data. 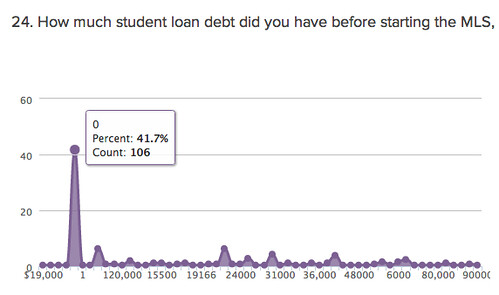 Student loan debt because of the MLS: 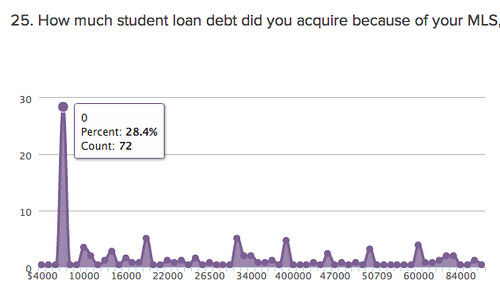 The benefits of a post-MLS librarian job:

Was it worth it? Most new librarians recognized their post-MLS jobs were good for training and colleagues, but not so much for salary. One in three was considering other careers. 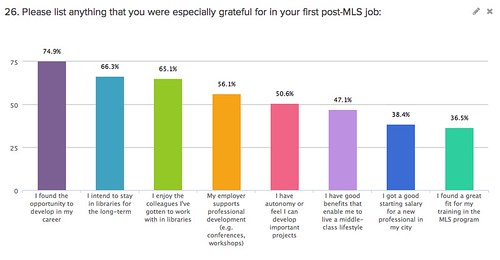 The challenges of those post-MLS librarian jobs:

Low income, a forced relocation, lack of healthcare or paid time off, long commutes, and family or government subsidies were all drawbacks of people’s first jobs after the professional qualification. In other words, librarians invest a lot of money and time in building a career… but it may take a while to pay off.

Here, I’d argue that if we want more racial, economic, and gender diversity in information work, we should ensure that the MLS easily leads to jobs with the autonomy, pay, and status likely to make them attractive to a wider set of Americans. As long as we don’t change the gendered economics of our field, I doubt we’ll effectively change the Librarian Stereotype and its demographic realities.

This brings us to professional librarian demographics, including age at graduation from MLS: 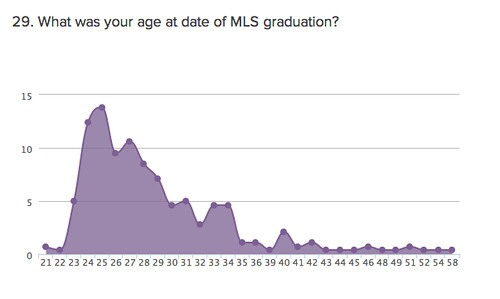 And age now, in late 2014. In case you’re having trouble, this is an area chart, showing the most common ages as the highest points. I’d assume with a larger sample that we’d get a more normal curve, but right now it’s elephant-meet-stegosaurus: 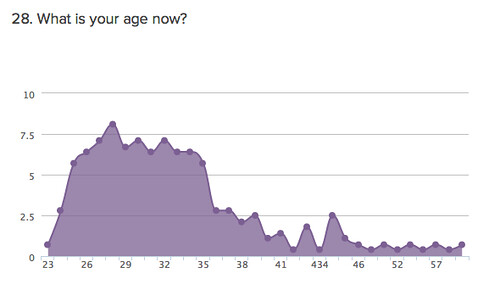 Gender is another factor, with about 90% of respondents in this sample being women. (For reference, 19% of current ALA members who chose to report demographics in 2014 are male; these could slant older than my sample). 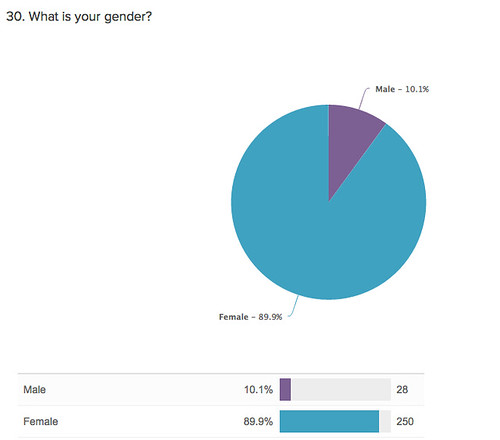 What race are librarians?

Note that I used U.S. government categories. They don’t represent our personal identities, but they do represent how libraries and library schools are judged against the U.S. population as a whole (which is less than 77% white), and how few minority candidates make it through the BA+MLS gauntlet. In this sample, a 90% majority identifies as European descent: 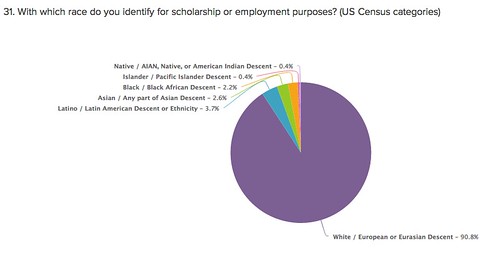 Here we’re trying to get at the class privileges you accrued growing up. Upper-middle class was the most common experience, followed by lower-middle class:

As you can see, most people grew up in the middle class. (For reference, America had a median household income of $53,000 in 2013). I suspect the working poor are still somewhat under-represented, due to the enormous investment in 6 years of higher education before starting a professional librarian job. Ambitious and well-funded people may select out of librarianship for more affluent careers, while those with low resources can’t afford to join us: 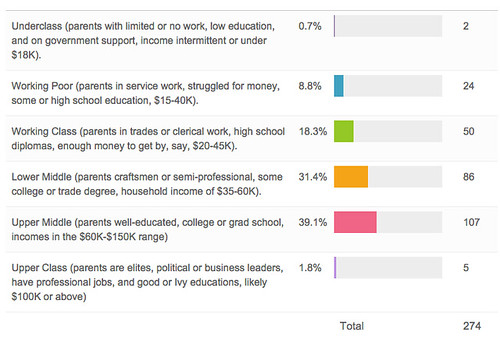 Education and degrees before the MLS:

This question asks whether people studied in ‘social’ or ‘numbers’ fields prior to the MLS degree. It’s a rough measure (e.g. social sciences touch both sides), so I’d love to work with others on refining this question: 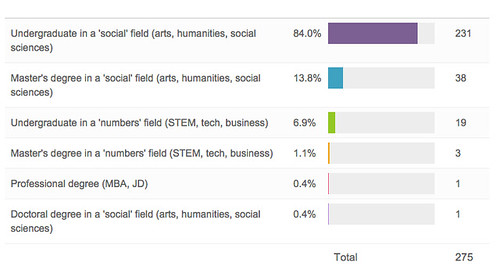 Social position and the job market:

One final graph looks at other factors that may impact librarians on the job market. Of 274 people who reached the final page of the survey, 20% identified themselves as LGBT, 10% worried that their weight might be a discriminatory factor, and 5% reported a disability.

There are three things not reflected in this post. The first is that people gave great answers to qualitative questions about their job experiences and what they would change; I have yet to analyze those appropriately.

The second is that I asked for salary data before, during, and after the MLS. The summary charts were terrible, so I’ll draw up my own charts in a future post.

And third, please remember that this is an impressionistic watercolor, not an oil by Pieter Bruegel the Elder. This survey has a lot to teach us, but it’s drawn from a small convenience sample of Facebook users. Let’s use it responsibly: not for citing percentages, but for prompting broad questions and further study into how our field fits within the larger political, social, and economic landscape of American life.

Questions? Comments? Please feel free to leave them below!